Well, we're getting ready to resume our Travel Schooling in France today, flying out of Toronto this evening.  It's been almost 2 and half years since our last trip to Europe (we went travel-schooling in Thailand in 2012). 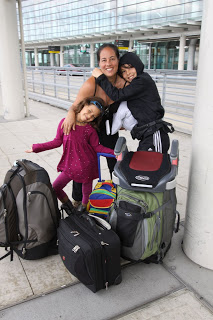 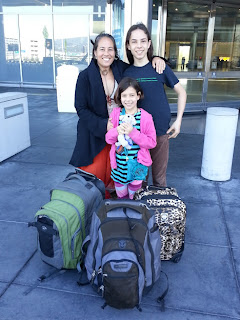 April 8-15: stopover in Toronto to see family and friends
April 15-23: Paris near Metro Bastille
April 23-30: Palestrina, Italy outside of Rome
April 30-May 11 The Loire Valley
May 11-18: Paris near Metro Saint-Sulpice in the 6th arondissement.

Here's how Paris greeted us.  This is on the Metro going from CDG to the city.


This time our plan is to focus primarily on language and we will be working with french tutors found on Craigslist for about 4 hours per day (shared between the three of us).  Angelique comes to our apartment. 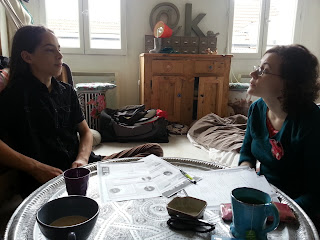 The rest of the time we will do a little touring, a lot of enjoying French food while also maintaining some class work from home like Coursera Functional Programming.

Other resources I'm gathering include:

For the Rome portion:

The Illustrated History of Roman History
The Children's Section

A semi-documentary called Colosseum A Gladiators Story. You can find it streaming online on YouTube or Netflix.

Also, very cool for immersing is ancient Rome in 3D on Google Earth.

Posted by LisaBL at 5:45 PM No comments:

Here's a travel tip I came up with on this trip, about which I am thoroughly thrilled:
Pack one zippered pillow-case for every person (or at least for each kid) in the family. On the plane or in the car, fill it with coats, clothes or even laundry for a makeshift pillow-cum-organizational carrying-case in which to contain those loose items you might otherwise lose. Our plane was hot so it was a great place to store the coats and scarves we had with us in case of air-conditioning. Also, we've been doing a lot of driving so having the functionality of pillows, without actually having to lug around a pillow the rest of the time, has been a life-saver.
When it's time to get back on the move, take out the items and put on your coat fold up the pillowcase, tuck it away...and go.
Picture to come...
Posted by LisaBL at 10:07 PM No comments:

It's taken a long time, but I think we're finally into a groove with our french-studies and general learning. Sure, there is learning in everything we do but I really wanted to use this trip to spend some time doing focused work with the kids in a rich environment. We were doing so much traveling at first, however, that having finding the time to sit down and talk, study and research, was difficult.
Now we are doing Rosetta Stone Online pretty much everyday. We've tried RS in the past and haven't been fans but for some reason the online version is really working for us. Soleil is developing a very nice accent, while Kaizen's vocabulary is excellent and surprisingly extensive considering how little french he has studied. Years of voracious reading apparently translates into second language acquisition.
Kaizen has lots of time to prepare his homework for the two Online G3 classes he is taking this semester, both of which, he is enjoying. I've always wanted to explore The Heroes Journey with Kaizen but I'm relieved that Jaime (aka Headmistress Guinevere) has taken on the task with her class Literary Lessons from Lord of the Rings. (Note: Kaizen adds that THJ exploration hasn't begun yet; rather the class has explored Tolkien history as well as comparison's to Beowulf including that Tolkien took the name Middle Earth from the Old English translation of mid-earth.)
This week Kaizen is getting ready to play his role in the mock trial which is part of the G3 Critical Thinking class. It's only thanks to the time change that we were able to add these to our schedule. Otherwise, the 8am start time would be pretty much impossible for us. Hmmm, wondering what we're going to do about that in December...
We're also doing Free Rice vocabulary daily, where Kaizen is accumulating rice for the World Food Programme by building his french vocabulary and Soleil is working on her english word knowledge.
Soleil and I just finished reading Eleanor: Crown Jewel of Aquitaine, France 1136 from the Royal Diaries series and now the kids and I are watching the series of 14 snippets of The Lion in Winter (1968) with Katherine Hepbourne playing Eleanor.
Kaizen and I are working our way through the translation of Tin-Tin "L'affaire Tournesol" (or The Calculus Affair) which is slow, however the combination of his Tin-Tin knowledge and my eight years of french grammar help to some degree.
Other language resources we are using:
First Well (Read-a-long) French video
Intended for kids but perfect for my level
French in Action
Video instruction in half-hour video programs
(only works in North America)
Tex's French Grammar
a pedagogical reference grammar that combines explanations with surreal dialogues and cartoon images.
Francais Interactiv
Look at the video section for listening and comprehension opportunites
BBC French
Interactive Website
From Alisa K.
Other various French online tools
Professor Toto Video
French through humorous situations
Crime Scene Investigation (French)
Not sure this will be useful
Posted by LisaBL at 12:42 PM No comments:

St Sernin with Christophe and Lena 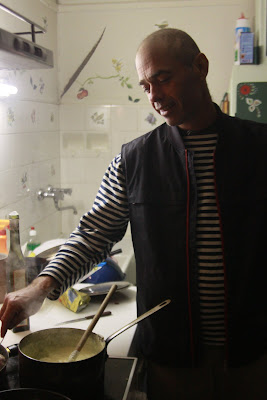 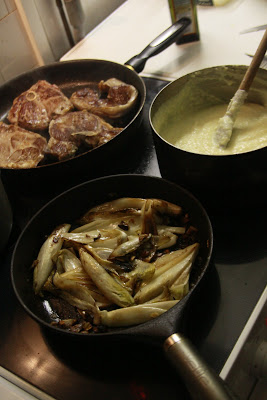 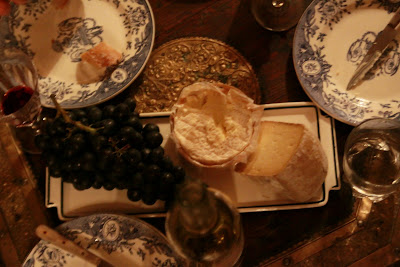 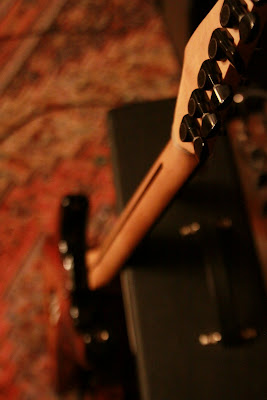 Posted by LisaBL at 5:34 PM No comments: 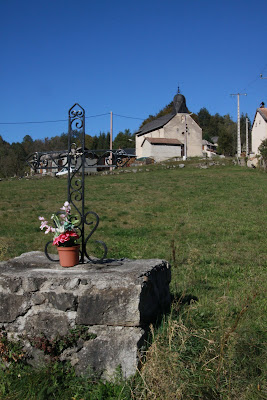 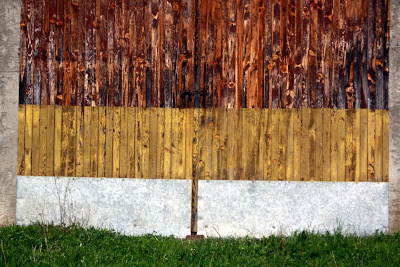 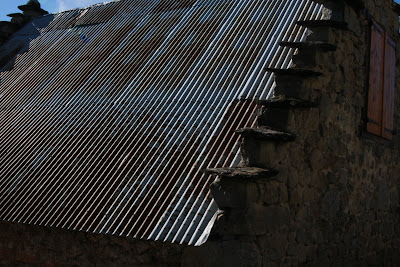 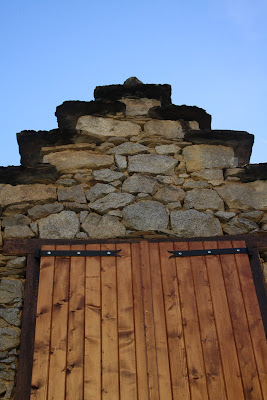 Homeschooling with Daddy via the internet:
Posted by LisaBL at 5:27 AM No comments:


List of some of the things we learned and experienced in The Caves of Niaux
-Compiled by Lisa, Kaizen, Soleil and Barbara
1. The Niaux cave is in the heart of the Pyrenees Mountains.
2. Flashlights are required though they are not allowed in the dark room only LED flashflights as LED flashlights don’t create much heat and the heat can destroy the paintings by allowing algae or moss to grow.
3. The difference between the oldest and the youngest paintings in the caves
4. We most common animal depicted is the bison, which is specific to Niaux. Generally the horse is the most popular.
5. The paintings are made with oxide of manganese (black) or charcoal and hemiotyte (red) mixed with water and animal fat.
6. The prehistoric people went inside with fat lamps (or candles); the flickering of the candles made the paintings have the appearance of movement
7. The animals depicted in the l’ariage caves (beside one weasel) are bison, horse, mountain goat or ibex, and deer.
8. The paintings were done by a type of prehistoric man referred to as the Magdalen men named for the name of the first cave in which their paintings were found.
9. There is a lot of graffiti with names and dates. The oldest graffiti found in the cave is from 1602 and the oldest one we saw was from 1652.
10. In 1902 the cave was officially discovered and dated as “prehistoric” though it was visited by locals since the 1600 who were unaware of the importance of the cave drawings.
11. The entrance we used is an artificial entrance, which was built because the natural entrance is too small to comfortably enter and often floods.
12. The cave is 2 km deep though the primary room we visited was only 800 metres in and is named the Salon Noir (or the Black Room).

13. At the time of our visit, there was one bat living in the cave.

14. The prehistoric artists used the natural shape of the rocks to give life to the paintings.
15. It is not known why the prehistoric people went deep into the cave to paint but it’s definite that they painters came into the cave for the sole purpose of painting because there were no other signs of the caves having been lived in; It is possible that any such evidence could have taken them before the cave was protected.

16. Every single painting in the cave –there are approximately 80– is done by a different person, and they know this based on stylistic studies.
17. Many of the paintings have specific signs and symbols, which are found only on the paintings in the caves of the Pyrenees region. Some of the symbols look like dots and lines and little is known about their meaning.

18. Some of the depicted Bison are illustrated them as if they are dead while others appear to be living.Bison specialists have been brought in to see if there was any new information they could find and they were able to determine the gender of the animals. Distinctive gender difference may or may not have been intended by the painters.

19. About 30 years ago there was a water intrusion problem in the caves, which washed away some of the paintings in the Black Room. In order to remedy the problem, pipes were added to redirect the water.

Pictures were not allowed so this one is borrowed from the web: